Home / Garden Care / How Long Does it Take to Grow Pumpkins

Most people probably head to the pumpkin patch in the fall to get their jack-o-lantern supplies, but did you know you can grow pumpkins in your garden? Plenty of people do, and while it takes a bit of time, it’s definitely worth the investment. 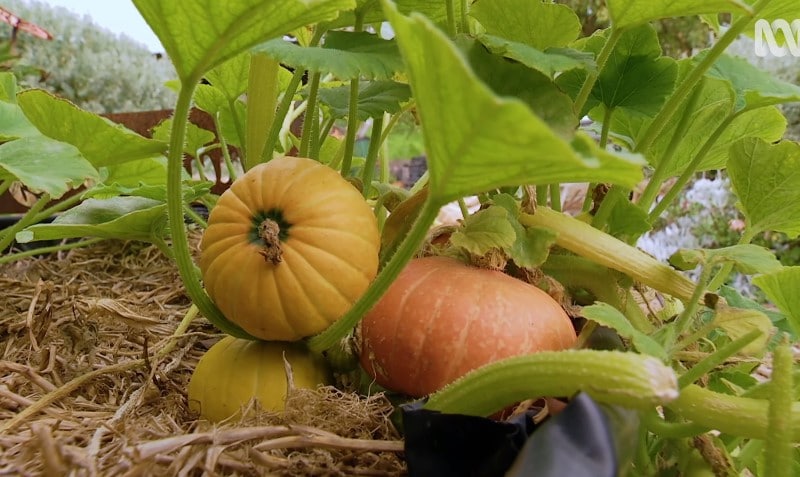 What do you need to know to grow pumpkins in your garden and how long does it take for them to grow? Let’s take a closer look to find out.

Life Cycle of a Pumpkin

Pumpkins are an interesting fruit, and there are many stages in their development. Knowing a little more about these phases helps to explain why it takes so long to grow pumpkins.

Seed. As you likely already know if you’ve ever carved a jack-o-lantern, pumpkins start as seeds.

Sprout. After you plant the seed, in a week or two, you should see two small green leaves attached to a single stem appear.

Leaves. About a week after appearing, the sprouts will grow bigger and form more leaves.

Vines. Vines appear next, and they grow very fast. At this point, you need to make sure the soil is properly fertilized and that you give the plant enough water. Pumpkin vines can grow as many as six inches in a day!

Male flowers grow on narrow stems that are close to a foot long. They are the first to blossom, and you should see a long stem connecting the male flower to the vine. The stamens, which produce pollen, are visible in the center of the flower. Interestingly, male flowers only live for several hours. New ones bloom every morning.

Female flowers grow near the base of the plant on a thicker, shorter stem than males. They have a small bulge under the bloom that is essentially the pumpkin waiting to be pollinated.

Female flowers have a longer lifespan than males. They open for a few hours every morning, then close until the next morning.

Maturing pumpkin. Over the weeks, the green pumpkin gets bigger and bigger. Once they reach their final size, they begin to change color.

Growing a healthy pumpkin starts with planting at the right time. In warmer climates where you don’t have to worry as much about frost, it’s generally recommended to plant pumpkins at the beginning of July. In cooler climates, aim for the end of May.

The variety of pumpkin you’re planting may change this a little, so make sure to do a little bit of research before you get started. But here’s the general process for planting and growing pumpkins.

Like most plants, the more time you spend learning about the ideal environment and giving the plant what it needs, the healthier your harvest will be.

Pumpkins prefer rich, loamy soils that drain well but hold onto moisture. Sandy soils tend to drain too quickly and heavier soils are usually too wet. Pumpkins like a bit of moisture without being overly wet. Consider working some organic material into the soil before planting, and choose an area that won’t puddle or get waterlogged after a rainfall.

Doing a soil test is always a good idea so you know if you need to correct anything. Pumpkins need a pH between 6 and 6.5. Also, keep in mind that pumpkins are large and feed heavily on the soil, so you will need to fertilize throughout the growing season.

Another thing to consider before planting pumpkins is how much space they need. Large, vining varieties of pumpkins need about an eight-foot area at a minimum, though some bush pumpkins only need about four feet. 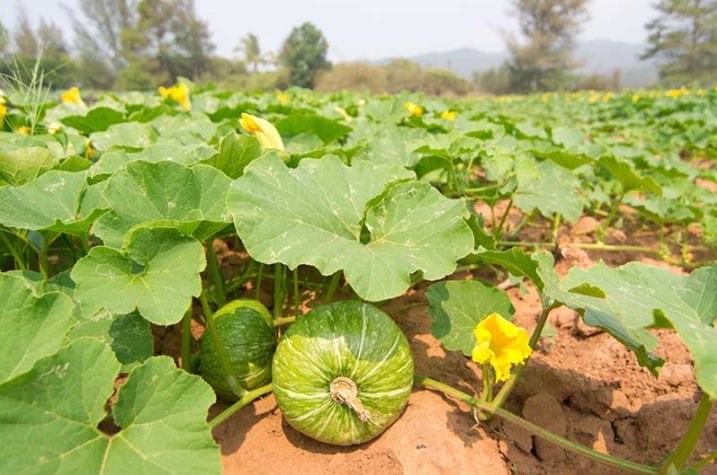 Making small hills out of the soil is a good way to make sure water can drain properly, and it leaves more room for the vines. Keep them about four inches high and plan on two plants per hill. Remember not to pack this soil, just lightly pile it so that water can still penetrate.

Sow the seeds directly into the ground, and if the conditions are suitable, you should see vines in about a week. You can control the growth by snipping off weaker, smaller vines or just to make sure the plant stays in the area you prepared for it. Doing so will not disturb or damage the rest of the plant.

The time from planting to harvest varies a bit, depending on the following factors: 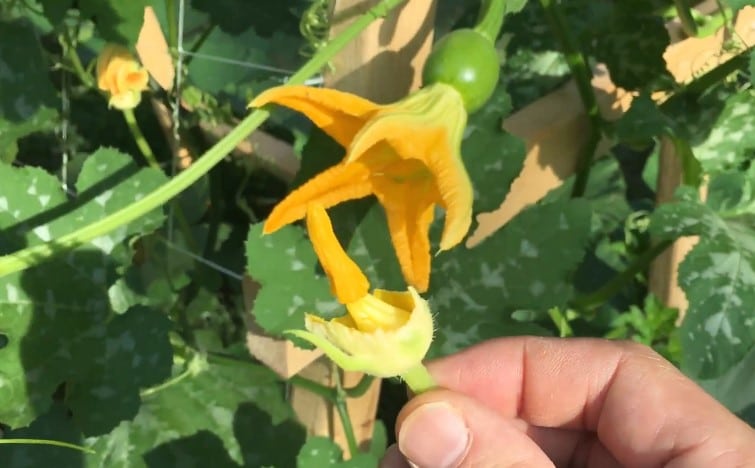 Pumpkins are a fruit and they need pollination to flower and develop. It takes about eight weeks or so for the male flowers to form. As mentioned, the females show up a few days later. After a week or two of the flowers blooming, you should start to see pumpkins forming.

As everyone knows, pumpkins are big, and it takes them a long time to mature. Once you know that pollination was successful, it usually takes around 50 days for the fruit to mature. It gets larger, changes color, and once ripe, the stems start to die away. 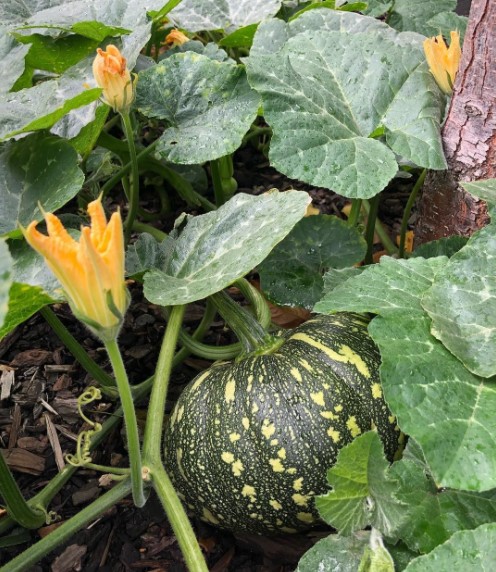 Harvesting pumpkins is a bit tricky. If you notice the vines are turning brown and drying up, it’s safe to harvest as the plant is unlikely to grow anymore. Keep on the lookout for rooting vines, too, as they will not be able to sustain the fruit, so you may as well pluck it off the vine. That said, if the vines are healthy, the pumpkin will continue to grow as long as it is attached. 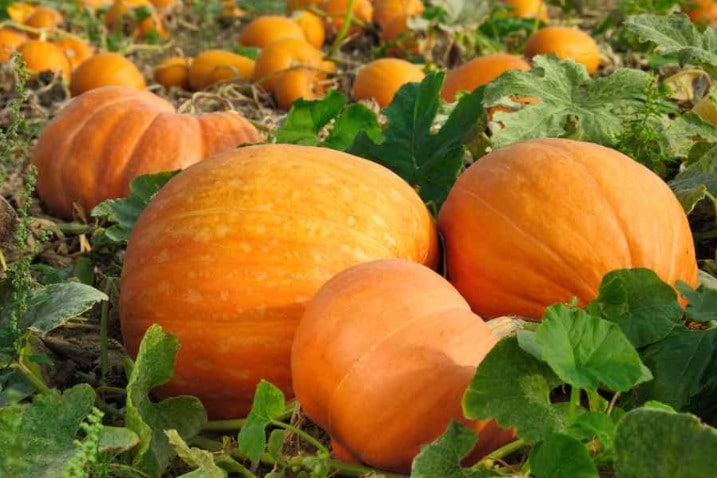 Although it is usually pretty obvious when the pumpkins are ready to be harvested, there are some tests you can do to be sure. First, stick a fingernail in the rind. It should be firm. If it’s too soft, it’s not ready.

To harvest, you need a sharp knife or pruning shears. Do not use a jagged blade or small saw as this could damage the integrity of the stem and cause diseases. Cut a few inches away from the top of the pumpkin. Do not just rip it off the vine.

Pumpkins with the stem attached will last much longer than those without one. If one happens to fall off the vine, use it for cooking or baking right away. It will rot if left to sit for too long.

You should also clean your pumpkin thoroughly before consuming it. Use water and 10% bleach solution to kill any bacteria or other organisms living on the outside.

Storing pumpkins is another process. For this, you need to wash them in a solution of water and chlorine, specifically, one part chlorine to 16 parts water. This will kill anything remaining on the outside of the pumpkin that could cause problems while the pumpkin is being stored.

Put the pumpkin in a warm but not place for about two weeks to extend the life of the fruit. Then, move it to a cooler area. Pumpkins can last up to three months in storage.

Pumpkins take between 75 and 100 days to grow if there is no frost. That’s why those in cooler climates should plant them about a month and a half to two months before those in warmer climates, but only after the ground has thawed from the last frost.