Most gardeners know that it’s important to have more female cucumber flowers than the males. This is because a single male flower can actually pollinate up to five female flowers at once.

It’s possible to increase the cucumber female flower count, which is going to make things much easier for you. 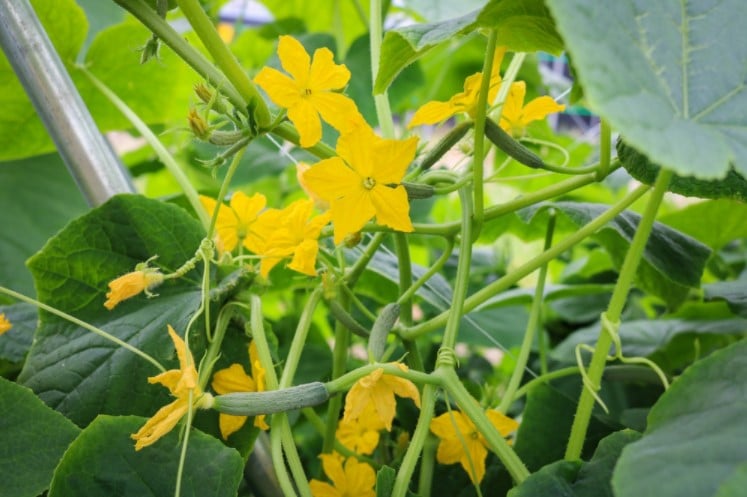 When you’ve got more female flowers on the cucumber, it’s going to produce more fruit. Each cucumber row should produce between 5 and 10 pounds for up to 12-foot rows. However, it’s also going to help to plant the right seeds to provide you with more female flowers.

In fact, you can double the cucumber’s fruit when you have more female flowers. Let’s learn how to increase female flowers in cucumber plants right now:

The temperature outside is one of the most important factors for figuring out how many female flowers you get. It doesn’t matter what species you use, either.

You’ve got to understand your area’s weather conditions. Male flowers tend to thrive more in higher temperatures. However, the female flower grows best in lower temperatures.

Is it possible to control the temperature? Mother Nature is going to have a say here. Typically, more female flowers are produced when it’s between 40 and 60 degrees (5-16°C) outside.

As the temperature spikes from 65 to 90 degrees (18-32°C), you’re going to get more male flowers. Though you can’t control the temperature, you can use this information to know how many females are going to be produced.

Consider planting more Gynoceious cucumber plants with some monoecious if you have higher temperatures in summer. That way, you’re going to have more female flowers than male ones. Also, focus on planting more Gynoecious in spring.

You must remember that female cucumber flowers grow better in moist soil. However, if it isn’t wet enough, more male flowers are produced. If you neglect to water the cucumbers, you may force male flowers to come out even if the temperature is lower.

How much you water determines how moist it needs to be. Consider giving the soil about 2 inches of water two times a week. That’s going to keep it moist enough so that the female flowers grow better. 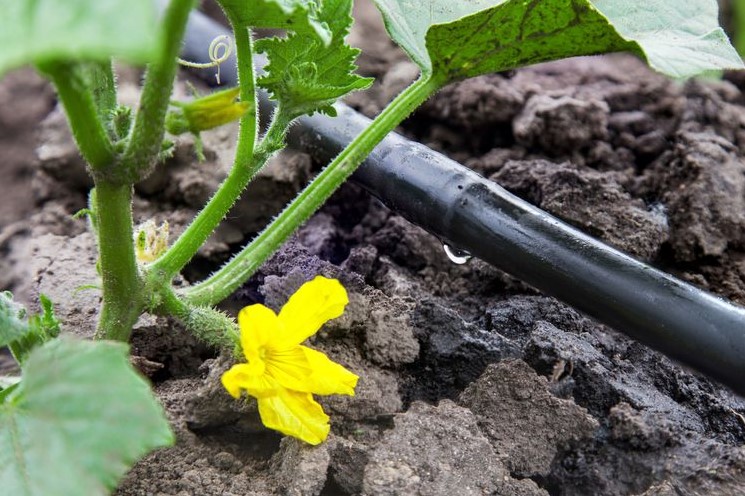 You do need to factor in periods of rain. When it rains, you may be able to waterless. Try only watering in the morning because cucumbers – even female flowers – don’t like excess water.

It’s also important to consider weed growth. Female flowers can’t withstand weeds and are going to die off. Weeds prevent the moisture from evaporating and also take most of the nutrients.

Soil management is key to increase female flowers in cucumbers. The way you treat the soil matters. Water, temperature, and mulching are all factors to consider, but so is nitrogen fertilizer.

Though nitrogen fertilizer is necessary to improve nutrients in the soil, you need a balance. In a sense, it’s an advantage and disadvantage. You need enough without having too much.

It takes about three to five days for the cucumber seeds to germinate. In the early stages, it needs to be between 80 and 90 degrees Fahrenheit (26-32°C). However, once the seeds sprout, you need to lower the temperature to encourage more female flower growth.

Sowing your cucumber seeds indoors before you transplant them is often best. Just make sure that you don’t disturb the roots when you move them to the ground or pot. 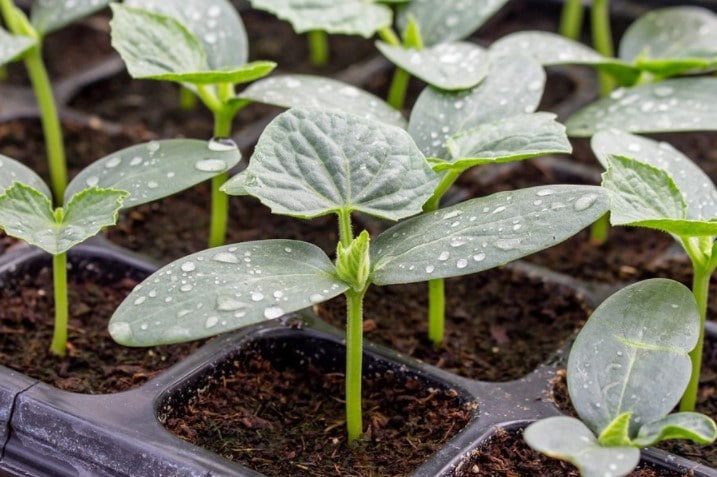 Sometimes, damaging the root system during transplantation is what causes the female flowers not to grow. Avoid such a problem by planting them directly in the garden. Cover the rows of cucumbers with plastic tarps if you’re worried about temperature problems.

You’re going to plant more Gynoecious cucumbers to have an abundance of female flowers. This means you have to focus on where to put them and how many you need.

How much space do you need between your cucumber plants? Typically, to get more female flowers, you want them to be anywhere from 18 to 24 inches apart. You can also space them between 24 and 36 inches apart in rows. 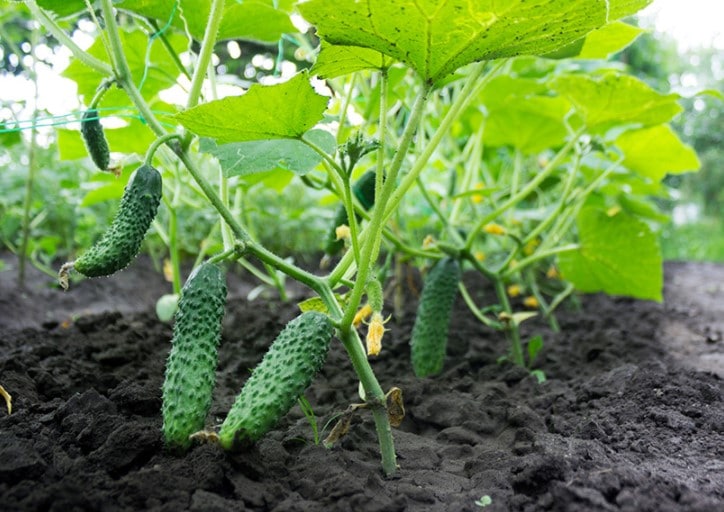 Female flowers are going to bear fruit, so they need all that extra room. If there’s little breathability between the plants, the species isn’t going to produce the right amount of female flowers.

It’s easier to use trellises or set poles when you’re trying to get the right amount of space between the plants. Since it promotes more female flowers, more air can also prevent disease. Air circulation ensures better female flower production.

Cucumbers are heavy feeder fruits, and most gardeners don’t know this. You need to use plenty of manure or aged compost to produce more female flowers.

If you’re planting from seeds, you should add compost to the soil before planting. Though some people add compost and aerate it thoroughly, you can also add it to the hole before putting in the plant.

Once they’ve been in the ground for about three weeks, the first flowers should appear. You should add more compost. Create a tea by adding compost to the water.

Strain out the bits and water with the compost tea. That way, you are going to give the plants the nutrients without the thick globs of earth. Also, make sure the cucumber plants have enough moisture because the compost tea might not be enough.

Cucumber plants are known for spreading. While this can be a good thing, you also have to consider that female flowers want more air. They can’t get that if the vine takes over everything.

Once you have enough female flowers, you can let them spread. That helps cut off air circulation, and no more female flowers grow.

Until then, you want to prune the cucumber plants. That is going to give you more female flowers and ensure better airflow.

It’s possible to use a wire cage or stick to prune the cucumber plants. Make sure that you put the wire around the cucumber. That way, it spreads up the enclosure and promotes airflow.

The wire must be strong enough to hold the full weight of the cucumbers. That way, as it spreads, it doesn’t break and do damage.

If you want your cucumber plants to produce a lot, you must ensure that no pests can destroy them. Ultimately, you should focus on the female flowers because they provide the most fruit.

You are probably going to use a pesticide to kill off any bugs and prevent them from coming back. However, you’ve got to be careful that the pesticide doesn’t kill the cucumber or cause it to produce less fruit.

There are specialty pesticides out there that only kill bugs and leaves everything else alone. However, some gardeners want to produce organic cucumbers. If you don’t want to use chemicals, there are other ways.

For example, you can use small-mesh netting to cover the cucumber plants as they start to grow. You may want to remove the nets in the afternoon so that the plants get plenty of sunshine.

If you notice more male cucumber flowers than female ones, you may need to consider the different species you plant.

Monoecious is a cucumber variety that bears female and male flowers at the same time. You’ve got to make sure the watering, fertilizer, soil, and temperature are all right for this species.

If you don’t, you’re going to see more male flowers. Ultimately, you can plant Gynoecious, which is an all-female flowering cucumber. That way, you get more female flowers without having to do anything else.

However, you still need the right conditions for them to flourish. If you’re not getting the results you want with the Monoecious bi-flower species, consider adding some Gynoecious. Though they have slightly different needs, they’re quite similar.

When you understand how to care for your plants and maintain them, you’re going to see better results. That way, you get more fruit and can enjoy cucumbers throughout the season.

By now, you’ve probably got a good idea about what to do to increase female flowers in your cucumber plants. Just remember that the female flowers aren’t as robust as their male counterparts. Therefore, you must ensure that the right conditions are met to produce them.

It isn’t hard to increase the amount of female flowers in your cucumber plants. You just need the best methods. This article has discussed those options with you to help you produce more female flowers.

When you have more female flowers, you are going to get more fruit. Ultimately, this means that you can make homemade pickles or have plenty of cucumbers to give to friends.