Home / Gardening Basics / What to Put & What Not to Put in a Compost Tumbler?

If you are looking to start composting, you are doing something that is great for the environment, and for your body, if you use your compost in your vegetable garden.

Yes, it is possible to buy compost that is already made, such as at a local garden center, but it is so easy to do yourself right in your own home. If you are reading this, it is likely that you are ready to make your own! 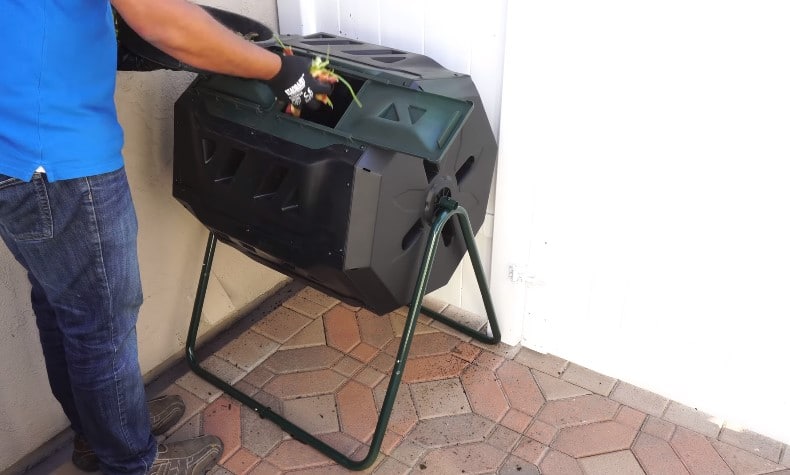 Here is a guide about composting, and we cover everything from what is the best bin to what to put…and what not to put….in your compost tumbler.

To keep things simple, compost is defined organic, decaying matter. It can take the form of many things including coffee grounds, grass clippings, eggshells, vegetable peels, and. Even leaves from the trees in the Fall.

Since compost is made from kitchen scraps, among other things, starting with a bin or pail in your kitchen is a great start. But you will need to move it out quickly into a different container.

Most people who compost have a tumbler or a bin. Others simply set up a pile of matter in their yard. Bins and tumblers are easy to find online or from your local garden center. You can also create your own.

The easiest compost bin is one made of wire, which is woven together and then formed into a circle. These are usually placed in an out of the way location.

There are also barrel bins that people use for composting. These are generally made with a 55-gallon barrel that has holes drilled into it. The holes are placed into the barrel to allow for airflow, which is an important part of composting.

You might also find bins made of wooden pallets. These are sometimes even sold as kits, or you can often simply talk to local companies about getting free pallets. There are plans online to create this simple bin.

If you go with a pallet bin for composting, you will need 12 pallets, which make up three bins. Essentially, you are simply starting the process in one bin and then moving the matter to another bin over time. The process then repeats itself over and over again.

What Should You Put in a Compost Bin?

First, let’s talk about things that can always go into a compost bin. Things like leaves from the trees and grass clippings are always welcome in a compost bin.

You can also add vegetable scraps to your bin including peels, like banana, citrus, and potato peels, skins, such as apple and avocado skins, and even things like coffee grounds. Yard waste can also go into the compost bin.

In addition to grass clippings and leaves, you can also put weeds. You do, however, need to use caution here, which is further explained later.

Another interesting thing that you can put into a compost bin is paper. People often put cardboard, newspapers, and printer paper into their compost. Sawdust and wood shavings can also be added.

When it comes to manure from animals that are not vegetarian, however, such as a dog or cat, you have to use caution. This manure can contain dangerous pathogens, such as bacteria, which can be dangerous and even ruin your compost.

If you do want to use this type of manure, you can minimize the chance of harmful pathogens by killing them. To do this, you have to make your compost pile very hot, but that has danger in itself. A compost pile can begin to smoke or even catch fire if you aren’t careful.

So, unless you are ready to deal with this, it is best to keep this type of manure out of your compost bin.

As mentioned before, you can put yard waste into a compost bin, but some of this waste, such as invasive weeds, can re-emerge in the compost. So, if you put a weed like thistle in, and then spread that compost in another area months late, you shouldn’t be surprised if you see thistle.

You also want to be careful with food scraps that might contain animal products such as fat or dairy. These can quickly attract scavengers like possums, raccoons, or rats. They also might attract insects that you don’t want in your soil.

In addition to this, you have to be careful when putting food scraps like noodles, eggshells, or bread. These, too, can attract animals.

It is always a good idea to lock your compost bin if you can. The helps to alleviate the pests that might appear. You can also wash food, such as eggshells, to eliminate this.

Watch out for colored newspapers or magazines. If the ink is soy-based, you can easily compost it. However, if the ink is not safe, it’s not a good idea to compost. There is also the fact that many of these colored sheets have wax over them, which can stop the composting process.

There are some other things that you don’t want to put in a compost bin. For instance, dead or diseased plants should not be mixed in. Again, you can spread this disease to other areas of the garden.

It might be tempting, for instance, to throw a tomato plant with blight into the bin, once it begins to decompose, that blight can spread throughout. Then, when you spread this compost, you are essentially giving every plant, blight.

A better choice here would be to burn any plant matter that has the disease. This way, you can stop the disease in its tracks.

We also already mentioned that unwashed shells or skins could be problematic, but so could any meat, dairy products, bones, or fat, including butter. The problem goes beyond attracting pests, though.

These items will begin to decompose, and no one wants to smell that rotting meat in their garden. So, it is in your best interest to choose to throw these things in the trash instead of throwing them into your compost bin.

Making the decision to compost is a great one. You can help to eliminate the waste you are throwing away, and in the process, you can create your own organic soil that will make your garden burst into color and growth.

There are many types of compost bins out there, as well as many things that you should and shouldn’t add to your bin. By learning all of this now, you are well-prepared to start your compost bin, today.