Many people have dealt with or at least heard of root rot in houseplants. However, you may not know that it can affect the garden plants outside, too. In fact, it can do damage to trees and shrubs. 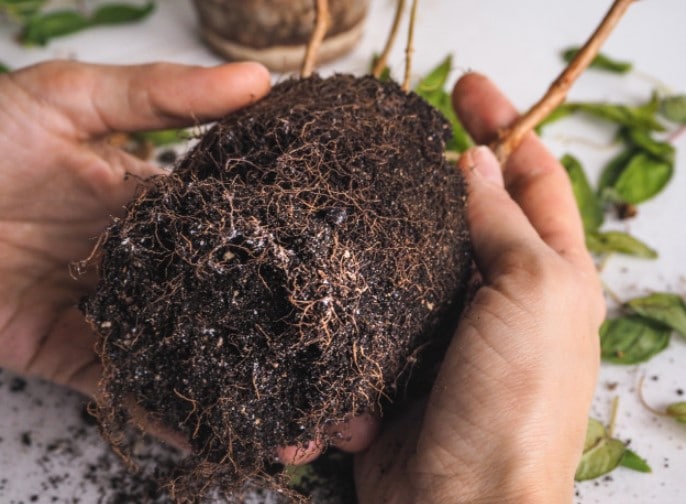 What Is Root Rot in Plants?

Root rot is a type of disease that attacks the plant’s roots when they grow in wet soil. The disease can spread throughout the soil. Therefore, the only true remedy for root rot in garden plants is to remove it.

However, there are ways around this problem. For example, you can:

Technically, root rot is a fungus. It tends to thrive in wet soil, and it’s easily transferred from one area to another.

To see root rot, look at your plants. If they have this disease, they can’t get enough nourishment and moisture from the soil. Typically, they look like they’re suffering from mineral deficiency, stress, and drought.

In the garden, root rot includes wilted, discolored leaves and stunted growth. Shoots and foliage may die back, or the plant might die. Pulling a plant up like this shows the brown roots, which are soft instead of white and firm.

In a sense, yes. Hydrogen peroxide can cure root rot because it attacks the bacteria responsible for rotting the roots. Ultimately, more oxygen is released into the soil. That means the plant can produce healthier and new roots.

It is important to understand that some plants with root rot cannot be saved. However, it’s always worth a shot because hydrogen peroxide isn’t that expensive. Just make sure you’re using it correctly to see the best results.

Is Hydrogen Peroxide Good for Plants?

Yes, hydrogen peroxide is great for plants. This colorless chemical looks like water. Many homeowners use it for various purposes, such as cleaning and as a disinfectant.

Many people use hydrogen peroxide to bleach their hair or get a brighter blond color. Plus, it can disinfect wounds and cuts and dries up acne.

Typically, hydrogen peroxide has a similar composition to water. It has a profound effect on plants, too.

In fact, most natural rainfall contains this chemical compound. Have you ever realized that rainwater does more than what comes from the hose? That’s because hydrogen peroxide adds more to the mix.

Generally, using hydrogen peroxide on the plants is a great thing, even if they don’t have root rot. It replicates the rainwater in your area, and plants love it!

How to Use Hydrogen Peroxide for Plants Root Rot?

It’s fairly straightforward to use hydrogen peroxide for gardening needs. However, you need to get the mixture right. It’s best to soak the plants around the roots with it to get rid of mold, spores, and other fungi (such as root rot).

The general rule of thumb here is to mix a cup of hydrogen peroxide with 32 cups of water. Then, go out in the garden as the sun goes down. Pour this solution into the pots and over plants and let it soak overnight. Focus more on the plant roots instead of the leaves. 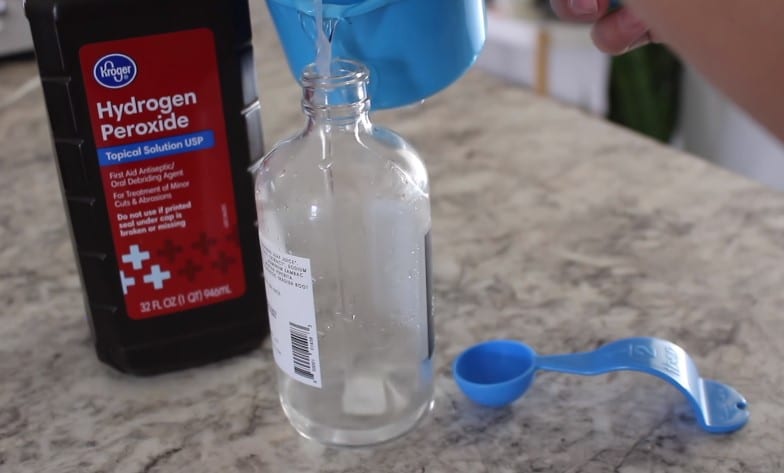 With regards to root rot, you also need to think about soil aeration. This is important for your garden plants. If they have enough room to get nutrients and air, it’s going to reach the roots easily.

If you’ve got compacted soil, the oxygen and nutrients can’t get through, and the plant dies. The best way to find this out is to pull out a plant and check the roots. Are they all tangled and squished together?

That means there’s not enough aeration in the soil. The plant is struggling to live.

This also matters and can contribute to root rot. Though it often focuses on overwatering, it is a common reason for decay around the plant or shrub roots.

Put the mixture into a spray bottle for the best results. Then, you can spray it all around the base and make sure it’s thorough. Don’t add any extra water here.

Every time you water your plant, use the hydrogen peroxide solution until there’s an improvement. The plant should look healthier. Also, consider removing the plant from the pot to make sure the roots are white and firm again.

Alternatively, you can remove the plant from the pot first. To do that, remove the potting medium from the roots. When they’re fully exposed, spray the hydrogen peroxide over the root ball.

You should then repot the plant in a new potting mixture. Dampen it with more of the hydrogen peroxide solution for best results.

Please note that this treatment isn’t always going to work. However, if you’re going to throw out a plant with root rot, there’s no reason not to try this method. If it works, you’ve saved your plant; if it doesn’t, you tried your best.

How Often to Use Hydrogen Peroxide on Plants?

If you’re specifically using hydrogen peroxide on plants with root rot, you should use it each time the plant is fully dry. Check the soil daily and use the right solution mixture to spray on the plants. Make the base of the soil moist is without becoming waterlogged.

Once you have done that, do not use anything on the plant, including fertilizer. Let it naturally dry up again and check to see if the plant looks healthier. If so, you can use the hydrogen peroxide solution again to kill off more bacteria (fungi).

Use It All the Time

When you water the plants, use that mixture to have healthier soil and plants. It’s recommended to use hydrogen peroxide every other watering for the best results.

Pay close attention when watering with straight water. If you notice that the plants don’t seem to do as well, they may flourish with hydrogen peroxide water each time. Experiment with different options until you find what works best for your plants and region.

Just make sure that you’re using a weak solution. You don’t want to damage the plants or burn them. Also, it’s a good idea to water them in the evening as the sun goes down.

This is the best choice for all gardens and plants because it prevents scorching. If the sun is out and hot, and you add water (even room or ambient temperature), it could burn the plant. That’s not what you want because it can cause it to die or stop producing flowers/fruits.

As long as you add the hydrogen peroxide to the water you use for watering, it’s not going to do any damage to the tree or shrub. However, you should never pour straight hydrogen peroxide onto a plant of any kind. It’s often too strong and could burn or kill the plant.

Treating root rot with hydrogen peroxide is possible. While it might not work in every case, it’s a great way to try to save your plant.

Ultimately, hydrogen peroxide can be used anywhere in the garden. Just make sure that you mix it with water so that it’s not too strong. It’s now that much easier to prevent disease and protect your garden plants!