The right soil is one of the most important for growing healthy plants, but how do you know which is the right one? Potting soil and topsoil are two of the most common types of soil available, but which one do you need? Let’s take a deep dive into the difference between potting soil and topsoil.

Topsoil is, unsurprisingly, the top layer of soil. It’s dirt, and when it’s wet, it’s dense and heavy. This soil can make up a layer that’s anywhere from a few inches to a foot thick. For the most part, topsoil is found naturally. It typically contains sand, clay, and even manure.

Because it’s natural, it also contains things like weed seeds, bacteria, and fungus. It’s not really good for planting in and of itself, but it does make a good soil conditioner.

Potting soil, on the other hand, is a mixture of multiple things and is ready for planting. Believe it or not, potting soil doesn’t actually contain any soil. It’s usually a mixture of perlite, sphagnum moss, and coir. This blend is ideal for growing plants to establish roots.

The main thing to know about potting soil is that you don’t need to add anything to it when it’s time to plant. Most blends contain a few months worth of fertilizer. It’s also blended of drain well and allows adequate aeration.

When to Use Potting Soil

Another great thing about potting soil is it’s sterilized, so you don’t have to worry about weed seeds growing in your containers. It’s also formulated to be light and doesn’t get compact, which makes it easy for roots to push through it.

On the other hand, potting soil is not suitable outdoors in a garden or flowerbed. Because it’s so light, it drains well and may dry out too quickly in an open space.

Use potting soil when you’re growing things in pots or hanging baskets. Generally, any small container that will restrict the growth of the plant to a small area is perfect for potting soil.

When to Use Topsoil

If you’re planting outside in the garden, use topsoil. As mentioned, it makes a great soil conditioner, so you can use it to improve the natural dirt and soil in your yard to prepare for planting. 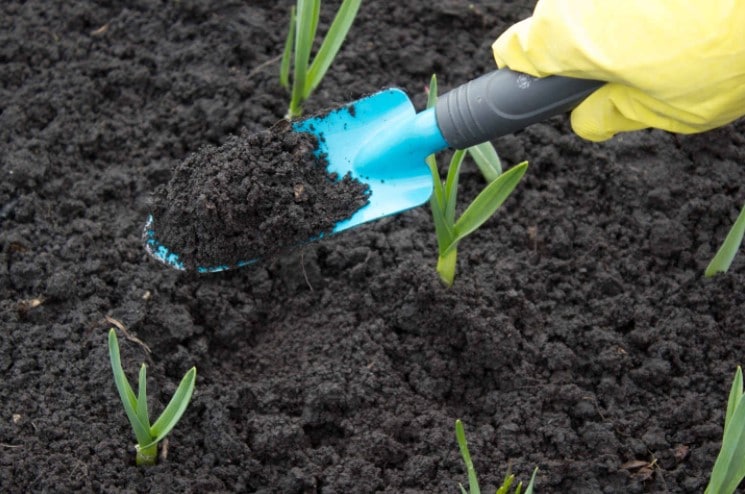 Combine topsoil in equal parts with the soil in your outdoor garden bed. This mixture not only gets natural nutrients and minerals into the ground but also helps improve drainage.

Topsoil is also a good choice if you have uneven spots in your yard that you want to level or if you need to flatten the earth underneath patio stones.

How to Use Potting Soil

At the end of the season, discard any potting soil you have leftover. It doesn’t normally keep well from year-to-year as the nutrients and fertilizer degrade over time. Add fresh soil to the plants that are already potted to ensure your plants get the nutrients they need.

How to Use Topsoil

If you’re preparing your garden for planting, add about two inches of topsoil to the surface. Then, blend it with the underlying soil and dirt. Blending is an important step in this process. If you don’t mix it well, drainage problems will occur.

Topsoil contains a lot of nutrients and will help enrich the soil in your backyard, but it is not the same as fertilizer. For best results, have your soil tested and use the proper fertilizer to make sure you get the best results.

Potting soil has many benefits, but it’s not fair to say that it’s better than topsoil because they are used for two completely different purposes. Still, it’s worth pointing out the pros and cons of each to get a better understanding of what they do.

The differences between topsoil and potting soil are pretty easy to distinguish once you understand what each is and how they should be used. Topsoil is to be used outside to build raised garden beds or to mix into the top few inches of dirt to prepare for planting.

Potting soil is, as the name implies, meant to be used in pots and other small containers. Read the label on the potting soil mix you buy carefully as you may need to add fertilizer to encourage strong plant growth.