Home / Gardening Basics / What Kind of Mushrooms Grow in Mulch?

If you are like most homeowners who want to make their yards look their best, it’s likely that you will lay down mulch at some point.

In fact, many homeowners put mulch down to improve the look of their home, but also to keep weeds at bay.

Though there is certainly mulch that is made from materials like rubber, most of us choose natural mulch such as pine needles, wood chips, or bark. When you choose natural products, however, they might not come alone.

Mulch actually creates the perfect environment for fungi, like mushrooms. It is moist, dark, and warm. If you have seen fungi growing in your mulch, you might wonder what type of mushroom it is. We are going to help:

Before we begin, it’s important to mention that you should not eat any mushroom that you find in your mulch, unless you are absolutely certain that it is non-toxic.

The 6 Mushrooms Growing in Mulch 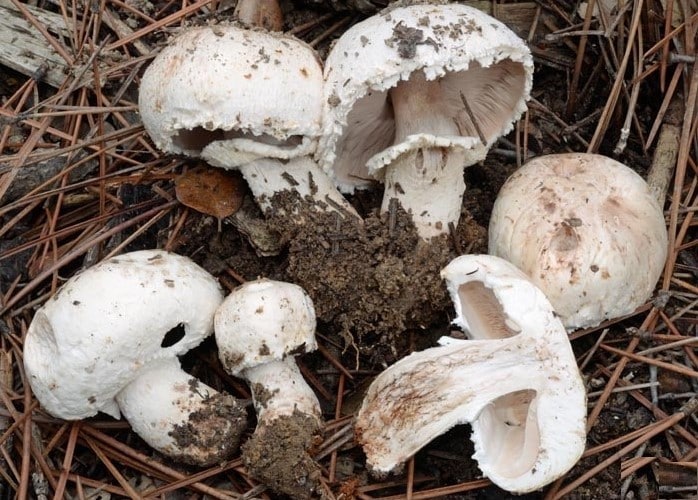 A salt-loving mushroom is often found in mulch along the coast of an ocean or sea. They are common in states like California, Oregon, and Washington.

This mushroom has large, round caps, and they are typically brown or white in color. Generally, you will see these mushrooms growing alone, but sometimes they grow in groups.

The salt-loving mushroom is edible, but some people don’t like the taste, which is described as similar to a button mushroom that you might find in the grocery store, but with a stronger taste and briny odor. 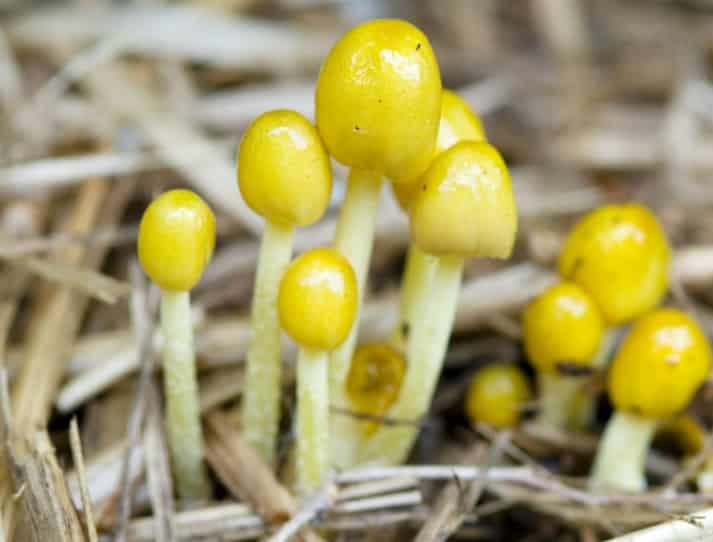 This is a cute, colorful mushroom that people often see in their mulch. It is very short lived, and changes shape and color in a matter of hours.

You may first see this mushroom in the morning looking like a yellow egg on a stick. Just a few hours later, it looks more like a white parasol, and by the evening, it could be totally gone! 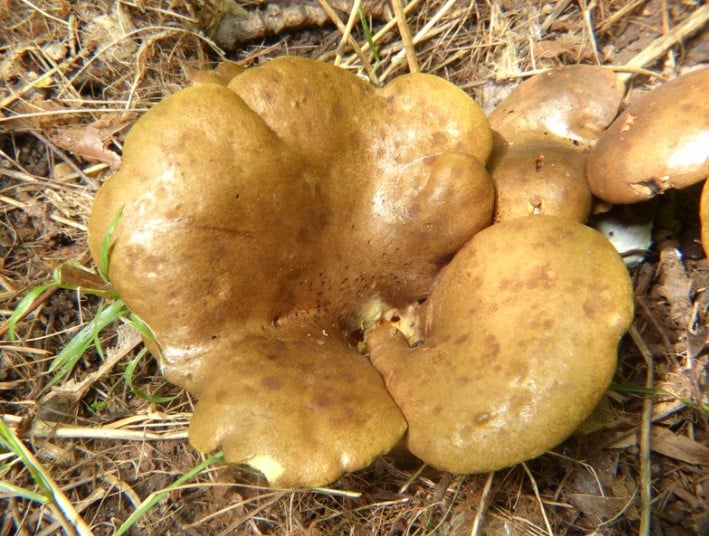 If you have an ash tree, or your mulch is made of ash wood, it’s very likely that you would find the ash-tree bolete mushroom growing in your mulch.

In the US, the ash-tree bolete grows in the eastern part of the country from Wisconsin as far south as Alabama, and spreads to the East Coast.

This mushroom is edible, but people find the taste to be bitter and acidic, and it is mostly used to make a natural dye, which is a brownish color. 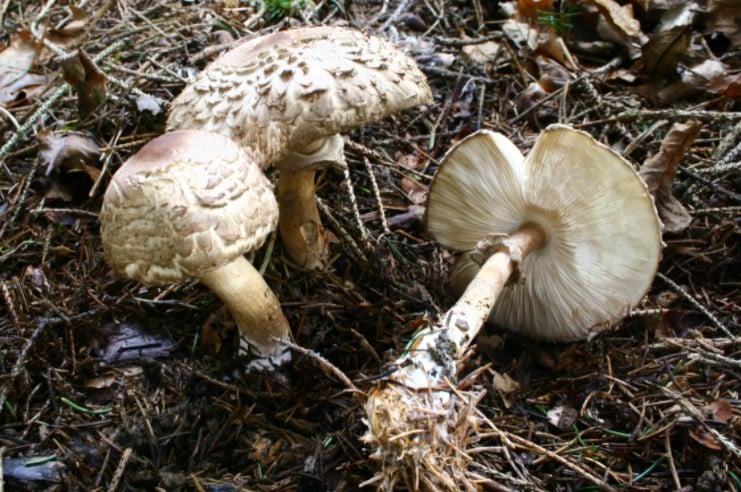 The shaggy parasol mushroom is a common one that is found in mulch. It has an interesting shape as it grows, and though the flesh of the mushroom is white, it has scales and bumps that look brownish in color.

The caps initially look like eggs, but as the mushroom grows, the cap spreads into a wide and flat cap.

Though this mushroom is edible for some, there are certainly people who have an allergy to this mushroom. Though it won’t kill you, it can give gastrointestinal symptoms.

Also, keep in mind that this mushroom looks very similar to one of the most common toxic mushrooms in the US, Chlorophyllum molybdites, also called the “False Parasol”. 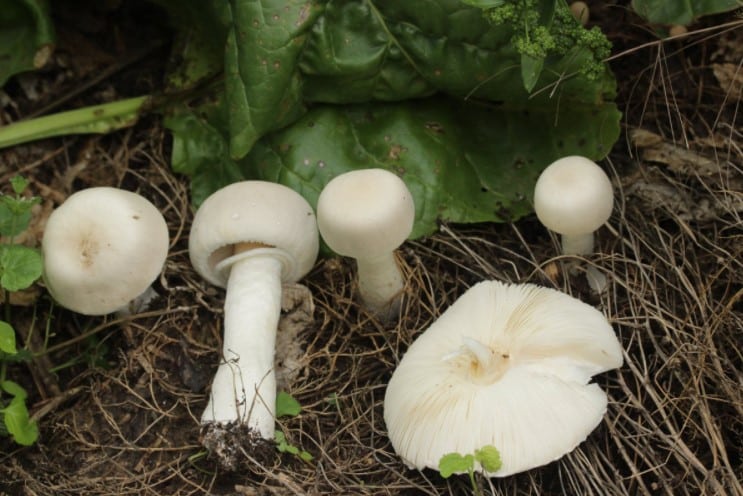 You can find the white dapperling mushroom in your mulch, too. This mushroom is white and tall, and it has a cap that, when bruised, turns brown or yellow in color.

This mushroom is on the larger side, with a cap that can get as large as 5-inches in diameter, and it has a wide base.

Again, though this mushroom is edible, people have reported gastric issues when eating it. In addition, this mushroom looks very similar to Amanita ocreata, a toxic mushroom known as the death angel mushroom. 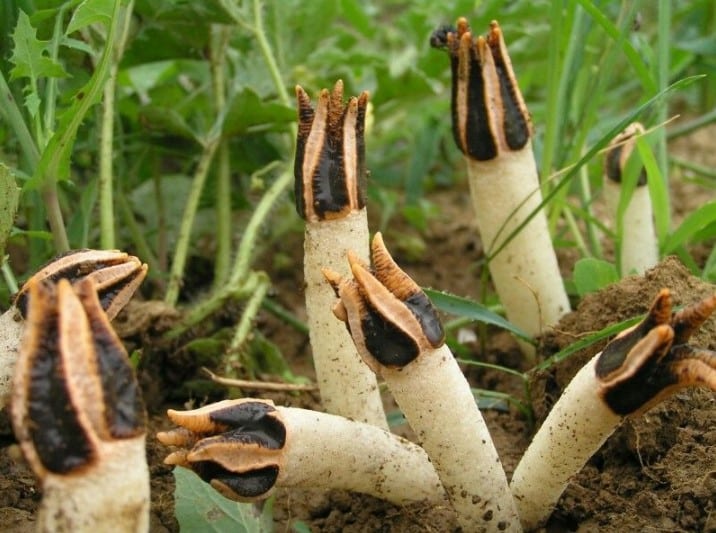 Finally, you can find the lizard’s claw stinkhorn. This is a pretty interesting looking mushroom without a cap. Instead, it has a number of reddish colored tubes, which look like arms, coming from the top.

You can easily recognize this mushroom by its looks, but if you need further confirmation, give it a sniff. It’s not called a stinkhorn for nothing!

How to Remove Mushrooms from Your Mulch?

The first thing you can do is to keep your yard cleaned up. This means removing leaves, dead flowers and plants, and even animal droppings, as all of these can contain spores, which ultimately grow into mushrooms.

You should also rake up your mulch a couple of times a month. Simply running a rake through it can help to remove moisture and get more air into it.

Many people use the same month year after year, but really, you should be topping up your mulch every season. By adding new mulch over your old mulch, you help to prevent the growth of weeds. Also, it’s the perfect time to add a fungicide, which can really stop mushroom growth.

If you notice where your mushrooms are growing, it’s likely that it’s in a shady area. You can eliminate this growth by making it a bit brighter by trimming up your trees and bushes.

Though you might want to keep your landscaping well-watered, it’s very simple to over water. Mushrooms thrive in wet conditions, so consider if you really need to water before you do.

Finally, consider not using mulch at all! This is a good solution for people who have a big mushroom infestation. Compost can be just as good, if not better, for your plants, and you can even produce the compost yourself.

If you have mushrooms growing in your mulch, they might be adding a bit of natural decoration to your landscaping. However, if you are like most people, you might not want them there at all.

Fortunately, there are ways to remove and prevent them, and it’s probably easier to do than you think.